The Threshold of Human Perception
by Ken Arneson

One of the beautiful things about baseball is the randomness of it. Differences in skill don’t become obvious after one game, or ten, or maybe even a hundred. Anyone can have a good game, or a bad one. The significance of an individual game isn’t quite visible to human perception.

Looking into the pitching matchups going into this A’s-Angels series, I would have figured the A’s to beat Dylan Bundy, but lose to Shohei Ohtani. Of course, baseball is baseball, and precisely the opposite happened. Bundy was dominant, while Ohtani couldn’t retire a single batter.

Ohtani was pitching for the first time since returning from Tommy John surgery. It was obvious he wasn’t anywhere near his old form. His fastball was about 5mph slower than before the surgery. Worse, he couldn’t locate the pitch where he wanted to, either. He gave up some hits, and some walks, and before you know it, Ohtani had thrown 30 pitches, retired nobody, and given up five runs.

The Angels mounted a comeback, thanks to the greatest player in the game, Mike Trout, who destroyed a 3-0 fastball from Mike Fiers to cut the lead to 5-3. And speaking of unpredictability, this was the first 3-0 pitch that Trout had swung at since 2016. It was a terrible pitch by Fiers, but he probably wasn’t expecting Trout to swing at all, given his history. If that data on Trout’s tendencies didn’t exist, Fiers probably wouldn’t have grooved that pitch.

Mike Trout is the greatest player of this generation. He might end up being the greatest player of all time. But like baseball itself, his greatness is subtle. You may not notice it if you just watch a game or two. Trout is not flashy, at all. He doesn’t have a body chiseled like a statue by Michaelangelo. His swing is not an aesthetically pleasing work of art. He’s just solidly, unrelentingly, consistently difficult to pitch to. When you add up his numbers, day after day, year after year, he always comes out on top.

If the beauty and mystery of baseball lies in its ability to operate just below the threshold of human perception, the Moneyball movement was all about removing that mystery. The numbers tell a story that human eyes can’t see. They allow us perceive those inperceivable elements of the game, help us transcend our human limitations, and triumph.

It takes a leap of faith to believe in something that you can’t really see. At first, the old guard resisted the new information, railing against the “nerds” who wanted to “ruin” their game. In the end, though, Moneyball became the standard practice. Just because you can’t see something, doesn’t mean it isn’t real.

I went out on a bike ride today. For some reason, someone had found it necessary to write the following in chalk on the bike path: 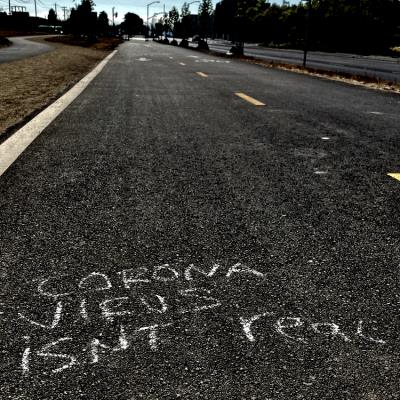 It’s easy to draw the parallel here, that much of what is going on in America right now is formed from a similar resistance by human beings to believe in the existence of things that operate just below the threshold of perception, that only show up in the statistics.

If you’re not an African-American, you likely haven’t been on the receiving end of repeated and persistent distrust, haven’t been followed by security guards in a store, been pulled over while driving a car without cause, been beaten for no reason at all. They aren’t personal experiences to you. They’re just statistics. It takes a leap of faith to believe them.

If you don’t personally know anyone who has been sick, the dangers of COVID-19 aren’t visible, either. They’re just numbers in a sea of numbers. 4,000,000 infected and 150,000 dead, but you don’t know any of them. 10x deadlier than the flu, and 2.5x more contagious, but how do you find horror in a mere handful of digits. A mask can cut your risk of catching the disease by 60%, and the risk of spreading it by 90%, but if you’ve experienced zero, 90% of zero is still zero. Can you believe these mysterious numbers enough to take social distancing seriously, enough to wear a mask in public?

Human beings often have a hard time believing things until those things become visible with their own eyes. They think “corona virus is not real”, until someone they personally know gets sick with the disease. They think racial discrimination is an exaggeration, until they see undeniable evidence of the cruelty of racial violence, such as George Floyd being choked to death for 8 minutes and 46 seconds.

And yet here we are — here I am — watching baseball through a pandemic and racial unrest, thinking and hoping that it will work out all right, refusing to stare directly at the statistical unlikelihood that the endeavor will succeed, plowing forward instead with the good old status quo until inevitably presented with the unwanted, undeniable evidence to the contrary which falls within the threshold of human perception.